Just over a year ago I managed to acquire ringworm on my face. It produced a horribly unsightly ring on my right cheek. Ringworm is a fungal infection (there is no actual worm) common amongst school aged children and athletes, especially wrestlers. As neither a child nor a wrestler I have no idea how I contracted it, save maybe the gym. I know in the grand scheme of life this might seem insignificant, at the time however it was nothing short of traumatic. Perhaps that sounds a little superficial. Perhaps dramatic. Perhaps it is. I can’t say. What I know is that a year ago my life was in flux. I was in a

job that I had outgrown and desperate for a change. I was unhappy, and didn’t know how to fix that. This episode sabotaged an already fragile self-esteem. I tried make up, I tried Band-Aids, and nothing helped. Having to answer over and over and over each day, “What happened?” for weeks on end was beyond embarrassing. It was completely humiliating. To make matters worse I didn’t know what happened. It was completely a fluke that this would occur at all. Much less on my face. People meant well and had good intentions, that didn’t make the questioning any less painful. In total it took about 10 weeks for my face to heal. 10 weeks of not wanting to go out in public. 10 weeks of feeling like a leper. 10 weeks of putting my life on hold.

Something shifted in me during the ordeal and it was during those 10 weeks that I rediscovered The Secret and more importantly the other thought leaders referenced in that book. It’s funny how life has a way of working. When I first read The Secret in 2006 I fell into the false lure of life being altered simply through my happy thoughts. After about a month I gave up. See, what I failed to get from The Secret was the fact that to really live using the law of attraction meant not only thinking in a new way, it meant to take action. It meant to have faith and put in the work knowing and believing 100% that things were going to happen exactly as you wanted. It meant acting as if it had already happened. That’s what I had missed in 2006. When I rediscovered the book last year I discovered 3 additional authors that influenced the beginning of my transformation. The poem Promise Yourself, by Christian D. Larsen became my mantra. The Master Key by Charles F. Haanel became my night time ritual and The Science of Getting Rich by Wallace D. Wattles became my inspiration. There will always come times in our lives that feel like the word is against us. Periods that seemingly undo all previous efforts and progress. How you choose to get through it is up to you.

It didn’t happen overnight, yet slowly but surely I began to change my mind and in doing so, I believe that I significantly 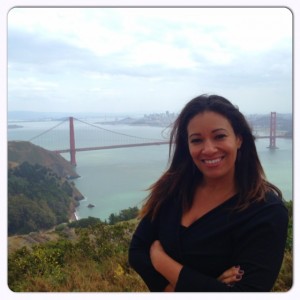 altered the course of my life. It’s interesting to look back at that time and see how different my life is now. Today all I need do is look in the mirror for a reminder of where I was and just how far I’ve come. My perfect ring shaped scar has faded some, but is still very noticeable. I’ll never know how I got ringworm, I’ll never know why. Except that maybe it was the catalyst for one of the most transformative years of my life.

How are you dealing with self-esteem sabotage? If you need support, coaching is a fantastic resource.

Aja Stanley is graduate of  The Coach Training Academy and a Personal Strategic Coach.
You can learn more about her work by visiting: www.ajastanley.com/